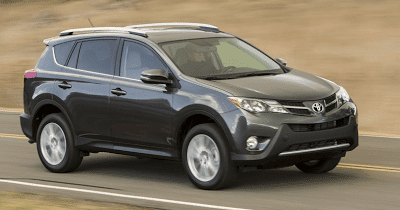 31% of the SUVs and crossovers sold in Canada over the last six months have worn Escape, RAV4, CR-V, Journey, or Santa Fe badges. For the Toyota RAV4 to overtake the Ford Escape and end 2013 as Canada’s most popular SUV, it would need to outsell the Ford by an average of 785 units per month over the remainder of this year.

The RAV4 has only outsold the Escape once this year, in March, and then only by 380 units.

GoodCarBadCar added the exclusively front-wheel-drive Fiat 500L to the new vehicle rankings list for June, but it’ll be shown with passenger cars on account of its missing all-wheel-drive. To define the words “SUV” or “crossover” in such a way as to please every reader would be impossible, but you’ll see the Mini Countryman, Buick Encore, and Chevrolet Trax here with SUVs and crossovers. The Subaru XV Crosstrek and Outback and Volvo’s XC70, for example, are shown with cars.

Defined this way, among 86 different vehicles, the Trax now ranks 19th. Trax volume reached new heights in June with 982 sales, and from May’s YTD rankings to the rankings you see below, it moved up from 24th.

All 144 Cars Ranked By June 2013 & YTD Canadian Sales
These are year-to-date rankings, but you can sort SUVs by June volume by clicking the June 2013 column header, or you can rank SUVs by improvements or declines using the % columns. Or, most importantly, you can list automakers together by selecting the SUV/Crossover column header. Just remember, the list is horizontally flipped from the norm: YTD on the left, monthly data on the right.

Italicized unranked lines are nothing more than available breakdowns, already included in the model’s total, not in addition to the model’s total. Sales data for brands such as Ferrari, Lamborghini are unfortunately not broken down by model. estimates say sales for those brands in June were 18 and 4, respectively. Total Maserati and Bentley volume is reported, but not by specific models.
* Notes: Total Santa Fe volume is up 22% to 13,711 this year, up 13% to 2553 in May. Land Cruiser is a commercial vehicle.