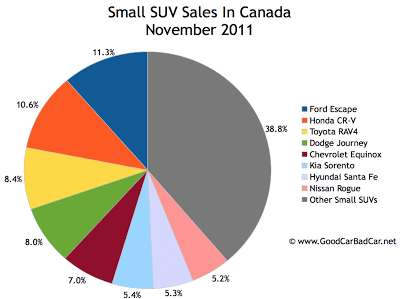 Mitsubishi began selling the RVR in Canada in September 2010. In the seven months thereafter, RVR sales increased on a consistent basis. More than a year after the RVR went on sale Mitsubishi Canada reported the RVR’s seventh-best month yet. That may not sound impressive, but the RVR operates out of a small division and managed to better than double last November’s volume. The RVR topped the Nissan Juke, its most obvious rival, and beat the more expensive Mini Countryman by a rate of 3.8 to 1.

Speaking of the Juke, sales of the smallest Nissan crossover rose 31% in November 2011. Nissan Rogue sales were up 52% last month. Scroll further down this page and you’ll see that sales of Nissan’s Murano, Xterra, and Armada were up 5%, 42%, and 29%, respectively, though Pathfinder sales dipped 12%.

Other Japanese SUVs and crossovers also did well in November. The Honda CR-V was Canada’s second-best-selling utility vehicle as sales jumped 135%. The Toyota RAV4 was up 26%. Mazda CX-7 sales nearly tripled to 891, the CX-7’s best month in recent memory, if not all time.

After the jump you’ll see detailed November sales numbers for mainstream midsize and large SUVs and crossovers. Monthly and yearly sales figures for all these models and every other current vehicle can be accessed through the dropdown menu in the top right of this page. 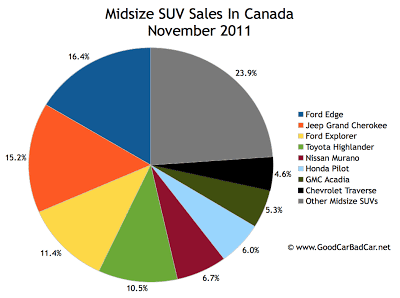 Collectively, sales of GM’s Lambda platform crossovers fell 29% in November 2011. The Lambda gang – Buick’s Enclave, Chevy’s Traverse, and GMC’s Acadia – see their main competition coming from Ford. Flex sales dropped 36%. The better-selling Edge was down 24%. Explorer sales weren’t as numerically strong as sales of the Edge but were up 109% over last November’s total.

Aside from the edge, the Jeep Grand Cherokee was a leading candidate for midsize SUV buyers. Sales slid slightly year-over-year but are up 49% through the first eleven months of 2011. The Grand Cherokee’s sibling from Dodge, the completely redesigned Dodge Durango, hasn’t gained traction in the Canadian marketplace. Only 183 were sold in November 2011, making the Durango barely more popular than the Hyundai Veracruz and a significantly less likely purchase than the Toyota 4Runner or any of the Lambda utility vehicles.

Speaking of Toyota, Highlander sales jumped 47% in November. Aside from the niche Land Cruiser, the Highlander leads all officially-marketed Toyotas with a 39% improvement year-to-date. 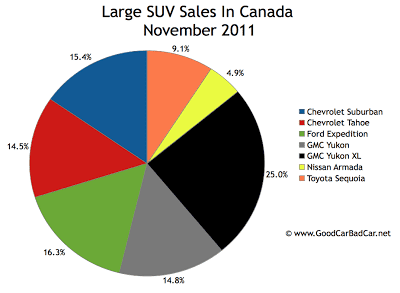 The majority of truck-based sport-utility vehicles sold in better numbers a year ago than they did in November 2011. However, sales of the Chevrolet Suburban, GMC Yukon, and Nissan Armada did improve last month on a year-over-year basis. Year-to-date, only the Ford Expedition, GMC Yukon XL, and Nissan Armada are up compared with the first eleven months of 2010.

The Armada remains the weak link in the segment despite its fast-rising sales. Admittedly, the segment as a whole is a weak link in Canada, as the seven jumbo SUVs in the table below account for less than half of one percent of all new vehicle sales in Canada this year.