Hyundai Canada sold a whole bunch of Velosters in September. That’s pretty easy to figure out after scanning The Good Car Guy’s recent tweets and sneaking a glance at the really long blue line in the chart below. Moving on then, let’s deal with not-so-obvious facts.

Audi A5 sales rose 5% in September. The TT was up 73%; that’s 16 units greater than September 2010’s Audi TT result. BMW reported a 25% improvement in Z4 sales; that’s a three unit increase. The Porsche Boxster was up 200%; Cayman sales jumped 300%. That’s an 18 unit improvement between the two of them. Mercedes-Benz SLK sales shot up 26%. Ooooh, that’s six sales better than the SLK managed at this time last year. Not to mock, but year-over-year increases or decreases measured in terms of percentage changes can be slightly misleading in this class.

Volvo sold 12 C70s, one fewer than Volvo Canada sold in September 2010. Volkswagen finishes up the Europeans with a 16% drop in Eos sales and a four unit drop by the GTI. Mini and Fiat, by the way, are both displayed in the small car category.

Chevrolet Camaro sales jumped 50%. The Ford Mustang was down 29%. Most notable among the year-over-year decreases: Dodge’s Challenger, down 66%, and the Honda CR-Z, down 57%. Both appeared on Canada’s September worst-selling cars list. 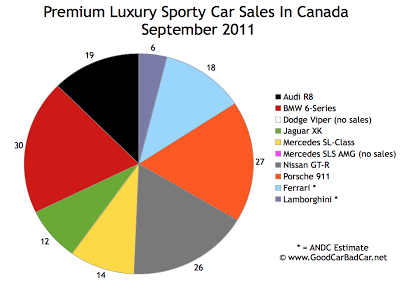 September marked the first occasion this year in which the Porsche 911 was not the top seller in the premium sporty car segment. 911 sales were up 17% year-over-year, but the 6-Series’ 650% year-over-year jump was enough to hand the victory to BMW. By three sales.
Nissan came close to scootching past the 911, as well. GT-R sales – wait a second, does the 530-hp GT-R scootch? – increased from 3 in September 2010 to 26 in September 2011, just one behind the usually unbeatable Porsche.