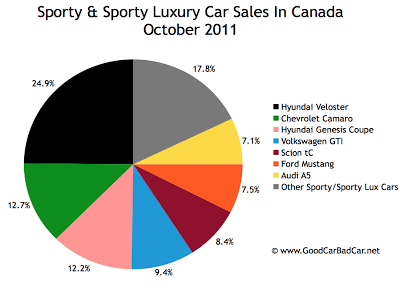 The Hyundai Veloster, under The Good Car Guy’s watchful eye all last week, just keeps chugging along, collecting Canadian sales at a furious rate. Compared to conventional, mainstream hatchbacks – with which the Veloster can be justifiably compared – the Veloster isn’t actually popular at all. On that point, admittedly, Canadian Hyundai dealers can’t get enough Velosters to satisfy demand, so perhaps the Veloster could be putting up sales figures more in line with conventional, mainstream hatchbacks.

Compared with other sporty cars and cars which simply intend to be sporty – many of which could be cross-shopped with a Veloster – the big-wheeled, tech-filled, lo-po Hyundai is a veritable hit. More than twice as popular as the Hyundai Genesis Coupe. More popular than the combined efforts of Honda’s CR-Z, the Mazda Miata, Mitsubishi Eclipse, Scion tC, and Volkswagen GTI. And less successful than it was in September, when Hyundai Canada managed to deliver 568 Velosters. GoodCarBadCar.net’s review of the 2012 Veloster is coming up soon, so have patience. The car has only just been returned to Hyundai.

As for the non-bargain basement sporty cars in the first table below, no vehicle reported a better year-over-year gain than the Audi TT. The TT is up 34% this year but jumped 77% in October 2011. Nissan 370Z sales, conversely, plunged 81%. Keep in mind, the market share chart above is useful but not the final word. Many of these vehicles aren’t intended to compete with many of the other vehicles on this list. Indeed, many potential competitors aren’t listed here because their sales figures are rolled in to the sales figures of larger product lines. 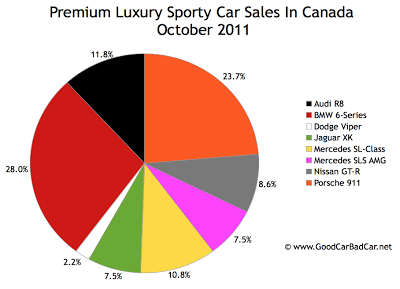 The BMW 6-Series continues to thrive in the perfect storm. While Canadian Porsche dealers wait for the already-introduced 991-gen 911 Carrera, and while the 6-Series is still newer and flashier, 6-Series sales are shooting through the roof. Well, maybe that’s an exaggeration. BMW Canada sold 26 6-Series coupes and cabriolets in October 2011. That’s not very many, but it’s more high-end sports cars than any other company sold last month. 6-Series sales were up 420% in October and are up 169% in 2011.