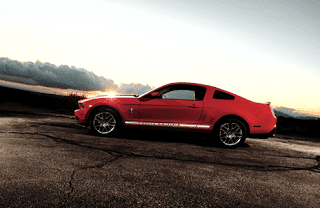 What’s stranger than the Audi A5 tying the Ford Mustang in monthly sales volume and the Scion tC absolutely crushing the Mustang, Chevrolet Camaro, and Dodge Challenger? Well, Ilya Bryzgalov talking about the universe in a hockey interview is stranger, that’s true. But isn’t the Mustang supposed to be an absurdly popular American muscle car?

Yeah, it is, and the Mustang is also a tremendous value. It’s better than ever. Yet through the first eleven months of 2011, Mustang sales in Canada are down 13.5%. That’s in a market that’s expanded, albeit slightly. The Mustang finished November three sales behind the declining Volkswagen GTI, 48 sales behind the Hyundai Genesis Coupe, and 106 sales behind the Scion tC. Just to be clear, the Genesis Coupe and tC also beat the Dodge Challenger and the year-to-date-leading Chevrolet Camaro.

It would be nice to think this is just a temporary rejection of the Mustang. Perhaps supply is tight. And hey, who wants to buy a rear-wheel drive pony car in early winter, right? There are a bunch of holes in that theory. For starters, we already know this isn’t a temporary Mustang rejection – sales have been down all year, in every month except January, April, and June. Much of Canada still isn’t experiencing winter – it’s 10°C in Halifax, Nova Scotia, right now and snow has fallen here once. As for supply and demand: can demand be high if a local Ford dealer is advertising a new Mustang with a $10,000 discount?

Keep scrolling for a look at November’s Canadian sales figures for high-end sports cars and GTs. On the way you’ll notice an awful lot of red font. Year-over-year sales declines, both in November and year-to-date, have been reported by the Audi A5, Chevrolet Camaro, Dodge Challenger, Ford Mustang, Mitsubishi Eclipse, Nissan 370Z, Porsche Boxster, Volkswagen GTI, and Volvo C70. Last month’s version of this post can be viewed here; check out the November American edition while you’re perusing.

In the luxury sporting car stratosphere, sales fluctuate wildly from one month to the next. However, for the last three months, BMW 6-Series sales have remained very healthy in Canada. With September’s 30 to 26 in October and November 2011, the 6-Series has finished ahead of its main rivals for all fall.

That is likely to change when the sixth-generation Porsche 911 arrives with the force only a (rarely-optioned) 7-speed manual can deliver. Presently, 911 sales fell 39% in November and are down 7% this year. With three fewer sales, the 911 would have been in tight with the Audi R8 in November, perish the thought in Zuffenhausen. 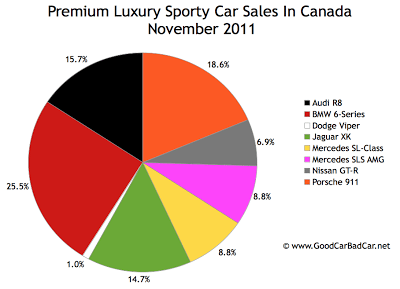