Wonder where the Canadian market’s at? This won’t tell you. However, it does tell you something.

Chrysler dealers sold more 500 Convertibles in the first quarter of 2013 than they sold Dodge Challengers.  Or Chevrolet Camaros.

Of course those two American cars don’t compete with the little Italian. If it competes directly with anything, the declining Fiat stands up against the Mini Cooper. The Mini range – Cooper Hardtop, Convertible, Clubman, Coupe, Roadster, Paceman – didn’t sell as often in the first three months of 2013 as the Fiat 500, not even including the droptop. (BMW Canada hasn’t yet isolated sales data for any Mini model aside from the Countryman.) 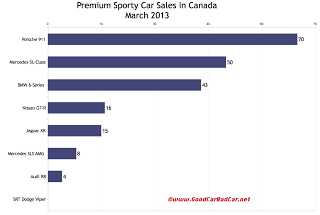 But the Fiat 500, even the Abarth, isn’t a traditional sports car. One could argue that the Ford Mustang isn’t either. Perhaps not even the Scion FR-S.

Indeed, so high is Boxster volume and so low is Mazda MX-5 Miata volume that the Mazda is only four units ahead of the Porsche in 2013.

You can click any model name in the tables below to find historical monthly and yearly Canadian sales data. You can also select a make and model at GCBC’s Sales Stats page. These tables are now sortable, so you can rank Canada’s sporty cars any which way you like. Suggestions on how GCBC should break down segments can be passed on through the Contact page.

Source: Manufacturers & ANDC
* indicates a vehicle that’s also shown in another GCBC segment breakdown.
GCBC isn’t here to break down segments, an impossible task for any group, but to display sales data for the sake of comparison. The more ways sales data can be displayed, the better, right? This explains why you’ll see the 6-Series listed here and with large luxury sedans and the Audi A5 here and with luxury cars, because readers have wanted it both ways. You can always find the sales results for EVERY vehicle and form your own competitive sets by using the All Vehicle Rankings posts.