The Scion tC and Hyundai Veloster weren’t on sale at this time last year. Porsche Cayman sales shot up 400%… from three to 15. Sales of the now-defunct Mazda RX-8 jumped 155%. Sales of the new Mercedes-Benz SLK were up 135%. Like the Cayman, Porsche Boxster sales improved, though only at a rate that was barely more than double, from six to 13. The Mazda MX-5 Miata was up 70%, thanks in no small part to interest-free financing on terms as long as 84 months.

As a muscle car group, sales of the Chevrolet Camaro, Dodge Challenger, and Ford Mustang fell from 1109 to 812, a 27% decline. The Hyundai Genesis Coupe is down 23% through the first eight months of 2011 but was up 2% in August. 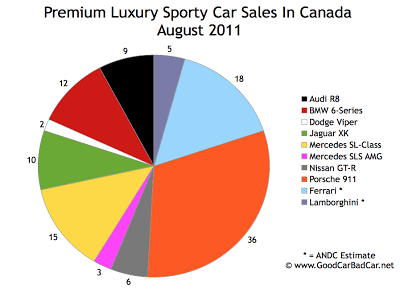 Two of the more premium-priced sporting cars fared somewhat better this August than last. The BMW 6-Series was up 140%. The class-leading Porsche 911 saw sales jump 29%.

Apart from that pair, however, the news was not so good. For example, Audi R8 sales fell 61%. The Mercedes-Benz SLS AMG was down to three from 18. Jaguar XK sales slid 38%. The market for hyper-exclusive sports cars is a tiny one in Canada, of course, so we can expect to see wildly fluctuating volumes of these models, both now and in the future.