In terms of average small car sales volume in Canada, the Mazda 3 continues to sell in relatively large numbers. Yet, as recently as last year Mazda was threatening to make the 3 Canada’s best-selling car. This year, Mazda 3 sales are down 30%. In June 2011 alone Mazda 3 sales dropped by 726 units, equal to 15%.

Insulting the Mazda 3 for its poor year-over-year performance would be ridiculous, however, given its status as Canada’s third-best-selling small car – and third-best-selling car overall – last month, more than 300 sales ahead of the Chevrolet Cruze. (One Chevy Cobalt was sold as well.) Moreover, Mazda 3 sales were expected to take a hit when the Mazda 2 went on sale. Indeed, those 726 lost 3 sales are more than made up by the 2’s 973 sales.
Meanwhile, the Hyundai Elantra was Canada’s best-selling car and best-selling small car in June but it trails the Honda Civic year-to-date. 1473 of the Elantras sold were Elantra Tourings. Hyundai Accent sales were off 6%, but you can expect a change on that front as new 2012 models hit dealers in great numbers. 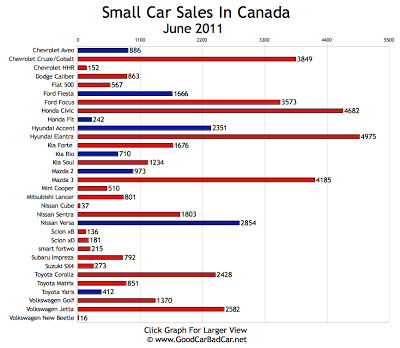 The midsize class-leading Nissan Altima posted a huge 199% sales improvement in June. In the first six months of 2011 the Altima is up 15%. 43% of all Altima sales in the first half of this year occurred last month.
A close competitor for the Altima in June was the midsize segment’s year-to-date leader, Ford’s Fusion. Though Fusion sales didn’t rise as dramatically as sales of the Nissan, with 8.5% gains the Fusion out-sold the next-closest Honda Accord by nearly 2000 units. Hyundai Sonata sales, by the way, plunged 31%. 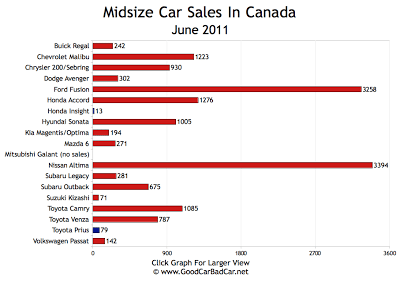 This’ll probably be the last month GoodCarBadCar.net bothers publishing figures for the defunct Lincoln Town Car and Cadillac DTS. More modern alternatives from Chrysler (300 sales were nearly chopped in half from June 2010 levels), Ford (Taurus sales rose 19%), and Buick (LaCrosse sales fell 15%) are struggling as it is to post big numbers. Antiques like the big Caddy and Lincoln would’ve been killed off long ago were it not for fleet and livery buyers.
The way to sell big cars that don’t wear BMW propellers or leaping Jaguars in Canada is by making them really inexpensive. Chevrolet sold more Impalas than Malibus in Canada in June. Granted, only 141 of the 1273 Impalas sold went to retail customers. 73% of the Malibu’s 1223-unit total was retail-derived. 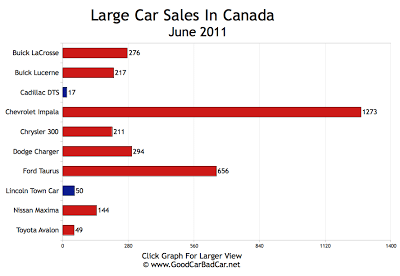