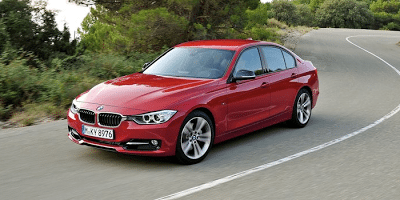 In one fell swoop BMW Canada laughed at my article in Sympatico Autos, sneered at Mercedes-Benz, and landed the 3-Series among the top 10 best-selling cars in Canada in September 2012.

3-Series sales shot up 51% in September, and while still off last year’s pace, 3er sales are clearly on the way back to healthy levels. 3-Series sales rose 13% in August after falling 29% in July.

Aside from the Bimmer, every other car on September’s list of Canada’s 20 best-selling cars were from mainstream brands. The leading subcompact was Hyundai’s eighth-ranked Accent. The Accent’s Kia cousin was only four spots back. Combined sales of the Accent and Rio hit 3126, exceeding what Chevrolet accomplished with the Cruze. Canada’s best-selling midsize car in September was the Toyota Camry, sales of which rose 38%. 315 of the 1490 Camrys sold were hybrids. The Camry’s ninth-place finish was its best since March.

Historical monthly and yearly sales results for 282 different vehicles can be accessed through the first dropdown menu at GCBC’s Sales Stats home or, for non-mobile users, near the top right of this page. The U.S. version of this post was published eight days ago; the UK version six days ago. Pertinent best seller links are clickable at the bottom of this post, after you can the list of Canada’s 20 best-selling cars from September 2012.