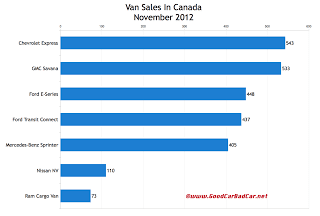 Canadian business (and maybe even a few families) registered 2549 cargo and personnel-carrying vans in November 2012, a huge 45.7% improvement compared with November 2011. This all occurred despite the fact that the best-selling commercial van, Ford’s soon-departing E-Series, slid 24% on a year-over-year basis.

GM’s twin vans took over as the two best sellers, Ford’s Transit Connect came within twelve sales of overtaking the E-Series, and the Mercedes-Benz Sprinter’s leap brought the German within 43 sales of tying the usual top-selling Ford.

Through the first eleven months of 2012, the Ram Cargo Van is Chrysler Canada’s 16th-best-selling model. The NV ranks eleventh among Nissan brand vehicles, ahead of the Xterra, Quest, Armada, 370Z, Cube, Leaf, and GT-R (in that order). The Sprinter sells more often than all but four Benz model ranges. Among the whole Ford Motor Company, the E-Series ranks eighth in volume; the Transit Connect eleventh, ahead of the Flex, Expedition, and every Lincoln. Meanwhile at General Motors, the Express generates greater volume than all but eleven models; the Savana is 13th, right behind the GMc Acadia.

As always, you can click any model name in the tables visible after the jump to see historical monthly and yearly sales figures. Or you can select any make or model at GCBC’s Sales Stats home. Any vehicle you can’t find tabled here will be listed elsewhere – you can select from segments like minivans and pickup trucks at GCBC’s The Tally page.

Click the accompanying chart for a larger view. In that chart, vans are ranked by volume – they’re listed alphabetically in the table below.