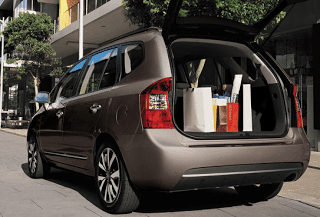 But again, we could go on and on about the champion month after month after month. It’s not as though minivans form the most interesting subject to begin with, but after discussing the same amazing Grand Caravan feats each time this post is published, it gets even more tiresome. So consider the true minivans for a moment, the Mazda 5 and Kia Rondo. No longer on sale in the United States because of a lack of interest, the Rondo continues to sell in decent numbers in Canada even as it drives by its best before date.

Rondo sales fell by only four units in September but are down 7% through the first nine months of 2011. Kia has sold 5246 Rondos in Canada this year. That beats the Mazda 5 by 196 units. Mazda 5 sales slid 31% in September and are off by 18% this year. Both the Rondo and the Mazda 5 have a new rival from General Motors. Chevrolet sold 83 Orlandos in September, the Orlando’s first month on sale. 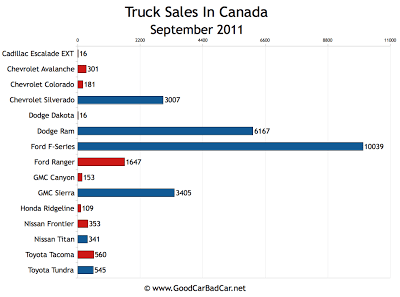 GoodCarBadCar.net already went into some detail on the ten most popular trucks from the chart above. What you didn’t see in the list of best-selling trucks was the Cadillac Escalade EXT, sales of which rose 33% in September. Neither did you see the Chevrolet Colorado, sales of which tumbled 34% last month. GMC Canyon sales slid 35%. The defunct Dodge Dakota was down 84%. The Honda Ridgeline narrowly missed out on Canada’s worst-selling vehicles list with a 66% decline.
Those trucks barely register on the chart above, buried in the shadow of Ford’s F-Series pickup, a truck which registered a market share reading of 37.4% in September.