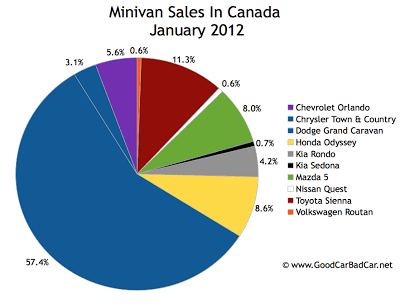 Having succumbed to defeat in 2011, the Mazda 5 surged past the Kia Rondo in the first month of 2012 to open up an early 231-unit lead over the Korean, nearly doubling the Rondo’s total in January. Neither of these vans is what you’d call a best seller in Canada, although the January 2012 results do have the Mazda within 36 sales of the Honda Odyssey.

Stuck between the Mazda and Kia Rondo in January was the Chevrolet Orlando. As befits a recently introduced model, Orlando sales fell only 2% from December to January even as the overall new vehicle market slid 15%.

The most popular minivan in Canada is, as always, the Dodge Grand Caravan. With 57.4% of the market (60.5% if its Chrysler Town & Country twin is included), the Dodge dominates its segment like no other vehicle on the continent. Grand Caravan sales slid 20% in January, although January was the van’s best month since September.

After the jump you can find year-over-year results for minivans plus full January results for pickup trucks. Monthly and yearly sales data on all these models can be accessed through the dropdown menu at the top right of this page or in GoodCarBadCar’s Sales Stats section.