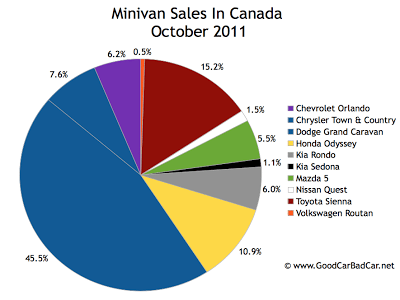 There’s no doubt the Chevrolet Orlando is beginning to have an impact. Although it’s fair to say we don’t know exactly which vehicles are being cross-shopped with the Orlando, the Mazda 5 and Kia Rondo appear to be Orlando alternatives. In October 2011, the Orlando beat the Rondo by 16 units and the Mazda 5 by 48. Moreover, the Orlando was four times more likely to be acquired than the Nissan Quest. The 2012 Chevrolet Orlando is unavailable in America but starts at $19,995 in Canada, rising to $22,295 for the 1LT, $23,595 for the 2LT, and $28,495 for the Orlando LTZ.

Though Dodge’s Grand Caravan had a decreasingly popular month, the brand’s Ram pickup fared rather well. As Ford F-Series sales fell 7% in October, Dodge Ram sales jumped 52%. Ram pickup sales are up 18% in 2011. More than one out of every five trucks sold in Canada last month were Rams.

October’s most dominant pickup in Canada was, or were, actually two trucks: GMC’s Sierra and the Chevrolet Silverado. Sierra sales jumped 31% year-over-year; Silverado sales were up 14%. Together, the GM twins owned 34% of the market and beat the Ford F-Series by nearly 1500 sales.

Small trucks – anything that isn’t a Ram, F-Series, Sierra, Silverado, Titan, Tundra, Escalade EXT, or Avalanche – found 2692 Canadian buyers in October 2011. That’s less than 11% of Canada’s pickup truck market, and 42% of those small trucks were Ford Rangers. The Ranger won’t be around much longer.