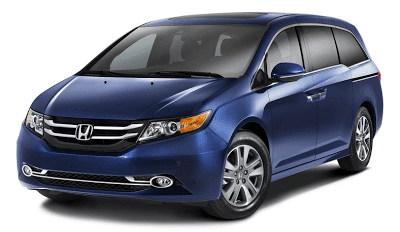 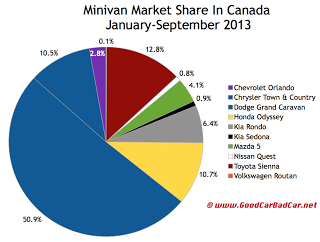 Sales of Canada’s mini-minivan trio plunged 41% in September 2013 as all three members of the 4-cylinder-only crowd posted declining Canadian volume.

Kia Rondo sales are up through the first three quarters of 2013, but sales in the sub-category are still down 36% as the Chevrolet Orlando (down 57%) and Mazda 5 (down 40%) bring the segment down.

So bad were mini-minivan sales in September that they’re losses covered up increases in the maxi-minivan segment.

Led by the Dodge Grand Caravan’s 3% year-over-year increase and the Chrysler Town & Country’s 180% jump, Canadian sales of bigger V6-only minivans grew 2% in September 2013. The Chrysler duo’s market share in the sub-category was 72%; 59% in the minivan category as a whole.

In total, Canadian minivan sales are down 6% this year, a loss of 4863 units. The Grand Caravan is Canada’s fifth-best-selling vehicle.

Measured by year-over-year decline, the Orlando was Canada’s 21st-worst-selling vehicle in September 2013.

You can click any model name in the tables below to find historical monthly and yearly Canadian auto sales data. You can also select a make and model at GCBC’s Sales Stats page. These tables are now sortable, so you can rank minivans any which way you like. Suggestions on how GCBC should break down segments can be passed on through the Contact page.