With sales split fairly equally, GM’s Lambda platform trio combined to out-sell all other midsize SUVs and crossovers in Canada last month. In a manner of speaking more easy to understand however, the Ford Edge was clearly the best-selling crossoverish SUV/CUV in the country in April.

The differentiation of General Motors’ Lambda platform crossovers is clearly a boon for sales. On the upscale and stylish end, Buick Enclave sales reached 516 in April. Canadian sales of the less-expensive GMC Acadia topped out at 496. 663 Chevrolet Traverses made their way to Canadian consumers. All three vehicles posted sales increases over April of 2009.
But it was the Ford Edge’s sales increase of 46.3% which helped shove Ford into seventh place on Canada’s Top 10 best-selling SUV list in April. Ford may celebrate its new car lineup more than it has in years, especially with a new Focus and Fiesta on the way, but Ford’s SUV/crossover fleet accumulated 5,775 sales in April. Ford’s car division managed only 4,686 sales. 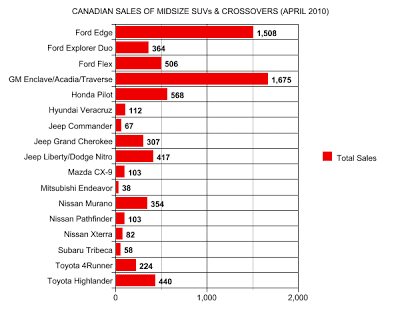