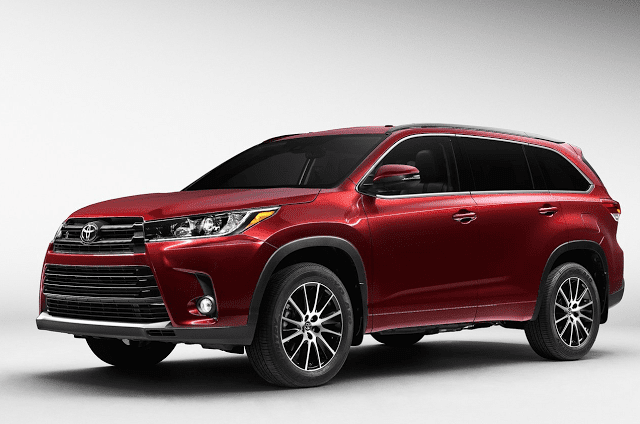 For a second consecutive month, the best-selling three-row utility vehicle in Canada was the Toyota Highlander.

Through the first two months of 2016, last year’s three-row SUV/crossover leader, the Ford Explorer, ranks third, behind the Highlander and Nissan Pathfinder. The race, of course, is tight, and the January and February sampling size is the smallest we’ll see all year.

But Toyota is ready to up its game. For model year 2017, the Highlander will feature a new face, a revised engine, and a new 8-speed automatic transmission.

There’ll be more power and better fuel economy, and the Highlander’s reputation for sterling resale value will remain.

In the meantime, Canadians buy and lease about 20% more Toyota Sienna minivans than Toyota Highlanders. Overall, Canadian minivan volume is on the decline, but after climbing to an 11-year high in 2015, Sienna sales are on the rise again in 2016.

Source: Automakers & Global Automakers Of Canada
* vehicle also displayed in another GCBC segment breakdown
^ Total Santa Fe volume: down 11.7% to 1773 in February; up 0.1% to 3609 YTD.
GCBC isn’t here to break down segments, an impossible task for any group, but to display sales data for the sake of comparison. The more ways sales data can be displayed, the better. This explains why you’ll see the Wrangler and Xterra listed with small SUVs, too, and the Subaru Outback shown with mainstream cars… because readers have wanted it both ways. You can always find the sales results for EVERY vehicle and form your own competitive sets by using the All Vehicle Rankings posts.