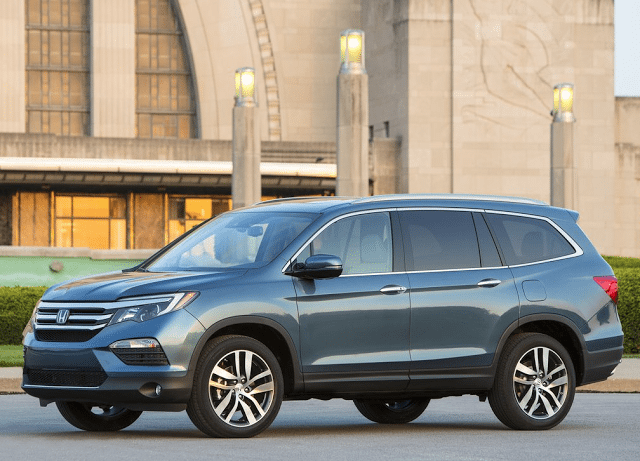 As Canadian utility vehicle volume continues to power the market to unseen heights, numerous three-row family crossovers are at the centre of the surge.

The Pilot, newly launched for model year 2016, is in its third generation, having lost much of its former boxy styling and finally upgraded its powertrain.

A $53,000 example sits in GCBC’s driveway this week, awaiting a comparison between GCBC’s own 2015 Honda Odyssey EX and this Honda Canada loaner. Over the last six months, Pilot sales have jumped 38% as Honda cleared out remaining second-gen models and welcomed the all-new MY2016 Pilot. In August, Pilot volume reached its highest Canadian level ever.

Canadian consumers prefer the Odyssey, however. During that same six month period, Honda has sold 6787 Odyssey minivans; 4781 Pilots. Will that order switch? The Pilot outsold the Odyssey by 346 units in August; 209 in September.

Source: Automakers & Global Automakers Of Canada
* vehicle also displayed in another GCBC segment breakdown
^ Total Santa Fe volume: down 14.3% to 2646 in September; up 0.2% to 25,032 YTD.
GCBC isn’t here to break down segments, an impossible task for any group, but to display sales data for the sake of comparison. The more ways sales data can be displayed, the better. This explains why you’ll see the Wrangler and Xterra listed with small SUVs, too, and the Subaru Outback shown with mainstream cars… because readers have wanted it both ways. You can always find the sales results for EVERY vehicle and form your own competitive sets by using the All Vehicle Rankings posts.