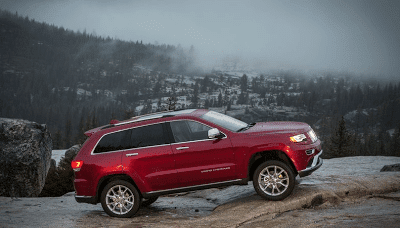 The Jeep Wrangler, enormously popular now as a four-door Unlimited, sells more often than the Ford Explorer, Toyota Highlander, and Buick Enclave combined. (Those three crossovers combine to sell more than twice as often than the Wrangler in the U.S.)

Rest assured, the Wrangler Unlimited isn’t a direct rival for the three-row Explorer, Highlander, or Enclave. However, the Wrangler is one of the few true-blue sport-utility vehicles remaining, and it is pulling in buyers from every corner.

Wrangler volume is higher than ever in Canada, and Jeep doesn’t sell an increasingly large number of Wranglers without attracting buyers who would otherwise buy an ordinary vehicle.

Speaking of Jeep, last month was the highest-volume June for the Grand Cherokee in the model’s history. It’s Canada’s 14th-best-selling SUV, one spot and 414 sales ahead of the Explorer.

You can click any model name in the tables below to find historical monthly and yearly Canadian sales data. You can also select a make and model at GCBC’s Sales Stats page. These tables are now sortable, so you can rank midsize SUVs and crossovers any which way you like. Suggestions on how GCBC should break down segments can be passed on through the Contact page.