The Toyota 4Runner outsold both the Chevrolet Traverse and the Buick Enclave in Canada in July 2013, a clear coup for the offroader, albeit a small one.

Through the first seven months of 2013, sales of GM’s Lambda platform trio, which includes the Traverse, Enclave, and more popular GMC Acadia, are down 2.4% to 6435 units. Ford has sold 6110 Explorers this year, a 1% increase, plus an additional 1695 Flexes. 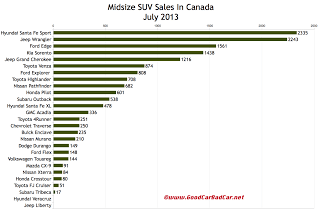 All of the vehicles mentioned to this point are, at the very least, available with three rows of seating. The Hyundai Santa Fe Sport, a viable challenger for both the Ford Escape and the Ford Edge, sells more often than all of the three-row crossovers in this post. Jeep’s Wrangler, which is available as a very tidily-packaged SUV and as a roomy Unlimited SUV, is more popular than the three-row midsizers shown here, as well.
You can click any model name in the tables below to find historical monthly and yearly Canadian sales data. You can also select a make and model at GCBC’s Sales Stats page. These tables are now sortable, so you can rank midsize SUVs and crossovers any which way you like. Suggestions on how GCBC should break down segments can be passed on through the Contact page.
Click Column Headers To Sort – July 2014 – August 2013 – June 2013 – July 2012