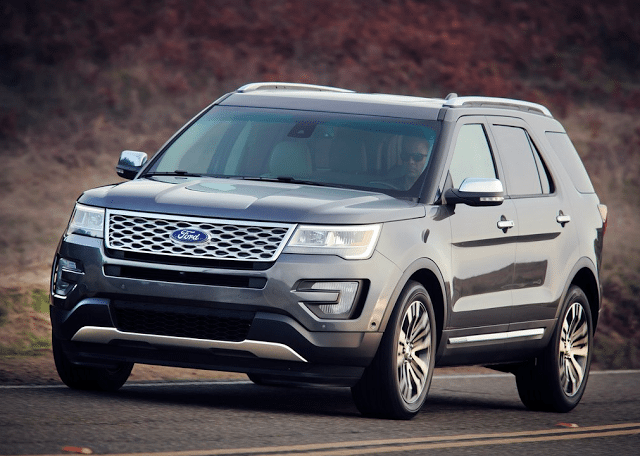 Canadian sales of the Ford Explorer continued to soar in August 2015.

The Explorer’s 59% year-over-year expansion produced an extra 732 sales for the Ford brand in Canada last month as Ford clears out remaining 2015 Explorers and launches the restyled 2016 Explorer.

Year-to-date, that GM trio trails the Explorer by 148 units.

But the Explorer was by no means the only three-row CUV which sold far more often in August 2015 than during the same period one year earlier.

Chevrolet Traverse sales jumped 33%. The Dodge Durango nearly quadrupled to 404 units. GMC Acadia volume was up 24%. The new Honda Pilot produced a 73% increase. Hyundai’s long-wheelbase Santa Fe XL produced a 6% gain. Mazda CX-9 sales were 69% better than in August 2015. The Toyota Highlander was up 47%, a gain of 274 units.

Source: Automakers & Global Automakers Of Canada
* vehicle also displayed in another GCBC segment breakdown
^ Total Santa Fe volume: down 27% to 2074 in August; up 2% to 22,568 YTD.
GCBC isn’t here to break down segments, an impossible task for any group, but to display sales data for the sake of comparison. The more ways sales data can be displayed, the better. This explains why you’ll see the Wrangler and Xterra listed with small SUVs, too, and the Subaru Outback shown with mainstream cars… because readers have wanted it both ways. You can always find the sales results for EVERY vehicle and form your own competitive sets by using the All Vehicle Rankings posts.