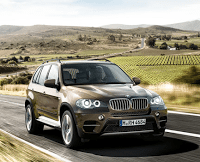 BMW sold 1426 utility vehicles in Canada in September 2011. That’s up 122% from September 2010. The increase could easily (but incorrectly) be wholly attributed to the addition of another member of the SAV fleet, the new X1. But that would ignore the fact that BMW’s three other utility vehicles posted significant year-over-year gains. One-third of those SAVs sales were made up by the company’s $61,800-$98,300 X5, sales of which jumped 69% in September.

The X3 (up 38% last month) can be viewed in the chart at the bottom of this post. BMW’s X6, not The Good Car Guy’s favourite vehicle by any stretch of the imagination, was up 3%, or three units, in September. Year-to-date sales of the X6 are up 6% compared with the first three quarters of 2010. 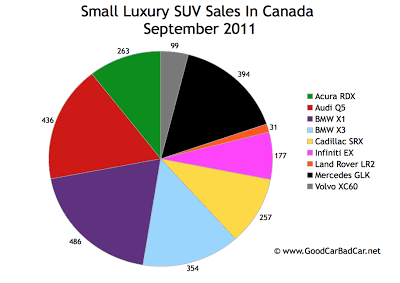 Now return to the subject of BMW, September’s top-ranked luxury brand. X3 sales were up 38%, as you already read, accounting for 12.5% of all BMW Canada volume. Between New Year’s Day and the end of September the X3 was responsible for 15.1% of all BMW Canada sales. The X1 was BMW’s most popular utility vehicle in September 2011, however. With 486 sales, the X1’s share of Canada’s BMW appetite was 17.2%. That made the X1, a vehicle not for sale in America, BMW Canada’s second most popular model overall, though the 3-Series (down 40% in September) was more than twice as popular.
486 sales also made the X1 Canada’s best-selling small luxury utility vehicle. (Some would say the RX belongs in this chart, and if it was included here, it would obviously be the victor.) Mercedes-Benz GLK sales slid 14% in September. The Audi Q5 was just two sales away from declaring a doubling of sales. 99% gains are nothing to be embarrassed about – the Q5 was up from 219 sales in September 2010 to 436 sales last month. Q5 sales are up 44% to 3553 year-to-date.