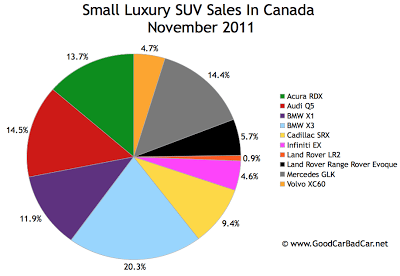 Let’s say you want a premium brand vehicle, but an impractical roadster like the BMW Z4 won’t cut it. You need practicality, but a $73,400 Porsche Cayenne S is a tad expensive for your tastes. There are great luxury wagons available, but you’ll visit many a Canadian BMW dealership which features not a single 3-Series Touring on the lot.

You’re left with ten options, at the very least. The ten vehicles in the first table below accounted for 21.1% of all premium brand sales in Canada in November 2011. Sales of the Acura RDX, Audi Q5, and BMW X3 soared in November, shooting up 62.1%, 94.5%, and 201%, respectively, compared with the same period in 2010. Through the first eleven months of 2011, the Q5, X3, Cadillac SRX, and Volvo XC60 are all selling better than they did in 2010. The most notable increase belongs to the X3, a hard-to-find vehicle last year that is now much improved in second-generation form.

Ranked sixth in this tightly formed class (or seventh or eighth if you’d rather see the the Lexus RX and Lincoln MKX included) is the Land Rover Range Rover Evoque. Sales increased 42.6% in its second month on sale.

Keep scrolling for a look at larger and/or more expensive luxury SUVs/crossovers. Last month’s version of this post doesn’t show the BMW X3 and Mercedes-Benz M-Class as class leaders. The U.S. November edition has the Cadillac SRX crushing the Germans and the Lexus RX beating the M-Class by 2784 units. Monthly and yearly sales figures for all these models and every other model currently on sale can be found by making selections in the dropdown menu at the top right of this page.

No vehicle in the table below reported as great a year-over-year decline as the BMW X6. Strange though it may sound, the dreadfully awkward-looking X6 was Canada’s 26th-best-selling luxury vehicle in November. The X6’s most obvious rival is probably the Acura ZDX, one of Canada’s worst-selling vehicles. ZDX sales slid 93.1% in November.

Nearing the end of a tough year, the Lexus RX has now reported two consecutive year-over-year increases in a row. The RX’s 11.2% bump wasn’t enough to fend off the Mercedes-Benz M-Class, however, as sales of the mid-range Benz jumped 46.8% to 615 last month.