In February, its seventh consecutive month with big year-over-year increases, the Audi Q5 was once again the most popular small luxury crossover in Canada, and by some margin. Out-selling the Volvo XC60, Range Rover Evoque, Land Rover LR2, Infiniti EX, and Cadillac SRX – combined – is no small feat. Q5 sales are up 25% through the first 1/6th of 2012.

The BMW X3’s notable decline in February 2012 is particularly interesting given the strength of BMW X1 sales. Now that BMW has plans to start selling the X1 in the United States this summer, could X3 sales fall south of the border, as well? Canadian X3 sales also slid last month.

On the heftier side of the luxury SUV/crossover scale, Mercedes-Benz’s M-Class overcame all of the less costly luxury crossovers, including little brother GLK, to grab top spot in Canadian luxury utility rankings. In fact, the M-Class was Canada’s second-best-selling premium-badged vehicle in February, 142 sales behind another Mercedes-Benz, the C-Class. M-Class sales were stronger than the combined efforts of the Volvo XC90, Volkswagen Touareg, Porsche Cayenne, Range Rover Sport, Land Rover LR4, Infiniti FX, BMW X6, and Acura ZDX. 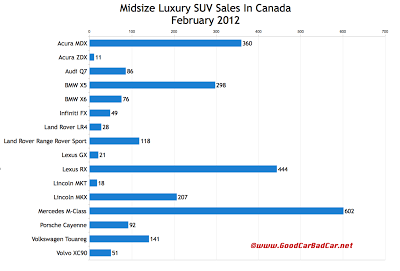 Detailed monthly and yearly sales figures for these models and every other automobile on sale in North America can be accessed through the dropdown menu at the top right of this page. After the jump you’ll find Febraury data for 26 luxury SUVs and crossovers. Sales info for jumbo utilities like the Cadillac Escalade will be published soon.