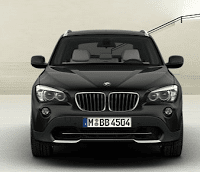 It’s not as though BMW’s slightly larger X3 was struggling in August. Sales jumped 79%. Both the Mercedes-Benz GLK and Audi Q5 were more popular, however, on 2% and 6% gains, respectively.

The Land Rover Range Rover Evoque will have a higher base price than every vehicle in the first chart below. At $46,995, $5395 more than the Mercedes-Benz GLK350, we can still expect to see Land Rover put up higher Evoque sales numbers than what the automaker’s been managing with the dull $44,950 LR2, sales of which tumbled 43% last month.

Though the BMW X1 is certainly doing well in Canada, BMW actually sold more X5s in August. X5 sales were up 10% last month, though the X5 is down 6% year-to-date.
The story of August’s midsize luxury fleet was the Acura MDX; not the BMW X5. MDX sales are down 14% this year, quite in line with Acura’s overall 17% drop, but August MDX sales shot up 24%, more than doubling up on the X5. Closer to the MDX was the Lexus RX, sales of which slid 29%. Sales of the Lincoln MKX rose 86% in August, significantly outpacing the overall Lincoln brand’s 27% year-over-year increase.
It wasn’t all roses at Acura and Lincoln, of course. Sales of The Bad 8‘s Acura ZDX and Lincoln MKT were down 71% and 23%, respectively. The ZDX was one of Canada’s Top 10 Worst-Selling Vehicles. 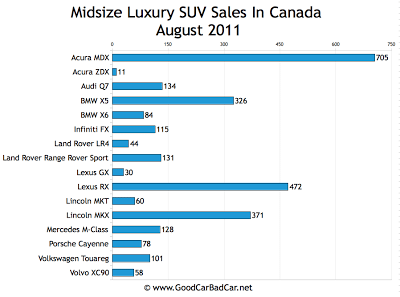