BMW Canada sold 667 X1s and X3s in February 2012. Sales of these two smaller luxury crossovers grew 3% in February 2013, but BMW accomplished this improvement with a very different approach than in the prior year. X1 sales plunged 64%. X3 sales more than doubled.

No premium brand SUV or crossover sold more often last month than the BMW X3, although it trails the Audi Q5 by 71 units through two months; and the Lexus RX by 40.

Move up a notch to spot vehicles like the Mercedes-Benz M-Class, Porsche’s Cayenne, and BMW’s own X5, which are by no means unpopular. Sales of the ML and X5 plunged in February, however, and are down sharply through two months. Porsche Canada has reported nine consecutive months of year-over-year Cayenne sales increases. The Cayenne was tied with the Scion FR-S as Canada’s 141st-best-selling vehicle through the first 59 days of this year, outselling more than 100 different nameplates. 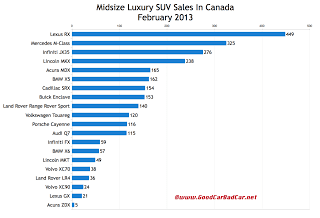 Historic monthly and yearly sales figures for all these vehicles can be found by clicking the model name in the tables below or by selecting a make and model at GCBC’s Sales Stats page. The accompanying charts can be clicked for a larger view.

The two tables you see here are sortable, so you can rank the SUVs five different ways: by volume, year-to-date volume, by year-over-year change, year-over-year change on a two-month scale, or alphabetically. Feel free to offer suggestions on how you’d like to see GoodCarBadCar break down luxury SUV segments in the future.

Source: Manufacturers & ANDC
* indicates a model which is also shown in another GCBC segment breakdown