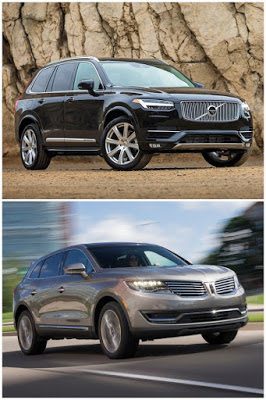 By far the best-selling Volvo in Canada in August 2015, the new XC90 posted a 246% year-over-year increase last month.

With 190 units sold, the XC90 wasn’t among the top premium brand SUV sellers, and it was well back of top rivals like the BMW X5 and Mercedes-Benz M-Class.

But it’s early days, and the XC90 is scarcely seen on Volvo dealer lots. As availability ramps up, so too will the sight of XC90s in parking lots and highways and driveways cause luxury SUV buyers to notice that there’s a handsome new Volvo available.

Meanwhile, another luxury SUV is regaining strength after transitioning out of first-gen form. The new Ford Edge-based Lincoln MKX was once again Lincoln’s best seller in Canada last month.

Taking over from the still fresh MKC, which slid 39% as the MKX became more readily available, the bigger of Lincoln’s two two-row crossovers produced 324 August sales, 46% of the Lincoln brand’s monthly sales tally.

Neither the XC90 nor the MKX are high-ranking premium utilities. The Audi Q5 is Canada’s best-selling luxury SUV/crossover. Q5 sales jumped 10% to 759 units in August. Lexus sold 609 copies of the RX in a down month as the brand prepares to launch a new model. As Mercedes-Benz turns the M-Class into the GLE-Class and launches a GLE “coupe”, sales jumped 37% to 696 units, second among all premium utilities last month.

But good looks, new technology, and an air of freshness are casting a pleasing glow on the XC90 and MKX. You’ll recall that the duo were former relatives. Along with Land Rover, Jaguar, and Aston Martin, Volvo and Lincoln were part of Ford Motor Company’s Premiere Automotive Group. Jacques Nasser, the man who created PAG, is now head of BHP Billiton.