Like its MDX utility vehicle counterpart, Acura’s mainstream $39,490-$48,990 TL sedan enjoyed strong September 2011 sales in Canada. Acura Canada reported a 63% improvement in TL sales, making it more than twice as popular as the $42,150 Lexus ES350 (down 28%) and 54 units stronger than Mercedes-Benz’s much more expensive E-Class/CLS-Class.

A big part of Acura’s autumn sales resurgence is the company’s 0.25% lease rate on 25-month leases, a deal which brings 25 months of complimentary maintenance along with it. Overall Acura sales rose 12% in September. Even the worst-selling RL reported huge gains, rising from zero sales in September of last year to four last month. 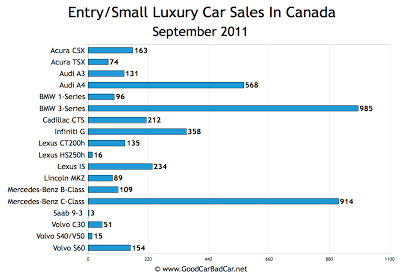 Sales of BMW’s 3-Series plunged 40% in September and are down 14% this year. The 3-Series was Canada’s best-selling luxury car in September, nevertheless, and is more than 2000 sales ahead of the Mercedes-Benz C-Class through nine months. The 3-Series was responsible for 34.9% of all BMW Canada sales last month. In September 2010, the 3-Series accounted for 62.7% of BMW Canada’s volume.
The new 3-Series has been revealed and GoodCarBadCar.net has images comparing the new F10 2013 3-Series with the outgoing car and a full 114-picture Gallery of the sixth-generation 3-Series.
So 3-Series sales were weak but strong in September. Its main European competition, the aforementioned C-Class Benz, reported a 38% year-over-year increase. Mercedes-Benz Canada is currently advertising finance rates for the C250 sedan at 1.9% over 60 months. The C250 coupe, on the other hand, is listed at 4.9% over 60 months.
Audi A4 sales slid 8% in September. The A3 hatchback was up 24%. Saab only sold three 9-3s during the 30 days of September. Volvo C30 sales dropped 15%. The S60 was up 103%. Separately, Volvo sold 13 S40 sedans and two V50 wagons. It’s sad to see Volvo give up on these cars, sadder still that the gorgeous Volvo V60 isn’t here. Yet?