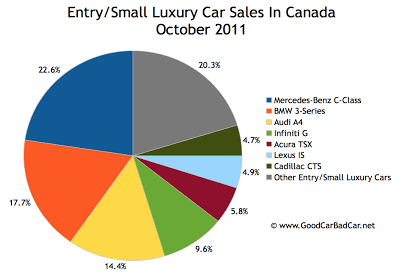 October’s Canadian sales figures for 36 luxury cars are listed in the tables below. 31 of those luxury cars were eligible to post year-over-year sales declines in October 2011, 21 did so. Of the smaller/cheaper group of 18 luxury cars in the first table, 12 reported drops.

Don’t forget, all these sales figures can be seen in GoodCarBadCar’s new searchable sales database in which monthly (back to January 2010) and yearly results (back as far as 2002) for specific models can be easily found. Just check out the dropdown menu at the top right of the page.