The Mercedes-Benz C-Class and Audi A4, smallerish representatives from Canada’s second and third-ranked premium brands in July 2011, ranked second and third in their segment last month. Sales of the C-Class and A4 combined do not measure up to volume put out by the 3-Series, BMW’s representative in the segment. BMW, by the way, was the first-ranked premium brand in July.

Sales of the BMW 3-Series dropped 16.6% in Canada in July 2011, however. That sort of decline isn’t unexpected with uncamouflaged 3-Series pictures already in existence. C-Class Benz sales fell 5.1%. The Audi A4 was down 15.3%. It was worse for the Infiniti G, Canada’s third-most-popular 3-Series fighter. Sales of Infiniti’s best-selling model slid 31.5%.

Then you have the Bad 8-losing Lexus HS250h, sales of which absolutely skyrocketed in July. The HS was up 433%. From three. To 16. Yeehaw.

BMW’s 5-Series was recently reengineered. Less controversial and distinctly more desirable, the 5-Series has been shooting through the roof in 2011. Through seven months the F10 5-Series is up 53.6%. That’s a very good thing. Looking at July alone, however, the 5-Series’ boost was a more reasonable 9.9%.
July 2011 was the new Audi A6’s month. Sales rose 43 units, 134%, to 75. The A6 now has a partner, the hatchback A7, sales of which reached 68 in July. Still, that’s just 143 between the two, only enough to be the fifth-ranked car in the chart below.
The next-generation (still tremendously boring to look at) Lexus GS is around the corner. Sales of the current GS were down 61.9% in July and are down 49.7% through the first seven months of 2011. Lexus sold fewer GS sedans in seven months than Lincoln sold MKS sedans in July alone. 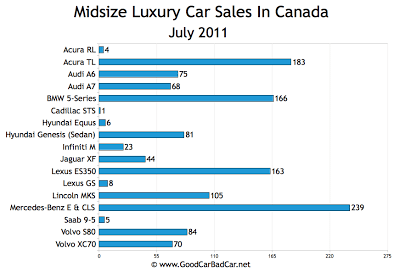