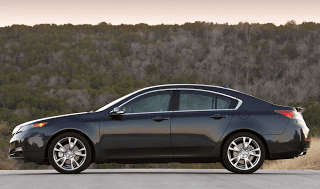 As we’ve already seen with the biggest and most costly luxury cars, Canadians are slowly turning away from high-priced premium machines in 2013. Flagship passenger cars at Audi, BMW, Jaguar, Lexus, Mercedes-Benz, and Porsche are collectively down 10% through the first ten months of 2013.

One rung down the ladder, the segment led by cars like the Mercedes-Benz E-Class and BMW 5-Series – and liberally bordered by much less costly cars like the Lexus ES and Acura TL – is down 13%.

Where have the buyers gone? Car buyers are still buying, as the Canadian automobile market will likely beat all records for total volume in 2013. But SUVs/CUVs from luxury brands are earning an increasingly large chunk of market share, and lower-end premium brand cars are attracting a greater number of buyers, as well.

There are specific reasons for the increase at the low end and the decrease at the high end. For example, the Cadillac CTS is ignored now as GM readies its impressive replacement. (Don’t forget the Mercedes-Benz S-Class, the leading large luxury car, is in a replacement phase.)

At the same time, “small” luxury is growing. Cars like the Cadillac ATS and Mercedes-Benz CLA-Class prove that there are more options for buyers who want something that’s relatively affordable but also premium in stature.

October was the Cadillac ATS’s best Canadian sales month in the car’s 13-month history. Mercedes-Benz CLA-Class sales are low for now, but October was only the CLA’s second month on the market. Over the last three months, Lexus’s new IS is up 124%. BMW Canada began selling the new 4-Series – formerly the 3-Series coupe and convertible – in October. 191 were registered. For just the second time this year, sales of the Mercedes-Benz C-Class increased, year-over-year.

You can click any model name in the tables below to find historical monthly and yearly Canadian auto sales data. You can also select a make and model at GCBC’s Sales Stats page. These tables are now sortable, so you can rank small and midsize luxury cars any which way you like. Suggestions on how GCBC should break down segments can be passed on through the Contact page. You’ll notice that the + icon has been removed from year-over-year increases, but you can still identify year-over-year declines with the – symbol and red font.

Source: Automakers & ANDC
* Indicates a vehicle which is also shown in another GCBC segment breakdown
GCBC isn’t here to break down segments, an impossible task for any group, but to display sales data for the sake of comparison. The more ways sales data can be displayed, the better, right? This explains why you’ll see the XC70 listed with luxury SUVs and the Acura ILX with mainstream cars… because readers have wanted it both ways. You can always find the sales results for EVERY vehicle and form your own competitive sets by using the All Vehicle Rankings posts.
^ Acura combines sales figures of the outgoing RL with the new RLX. Mercedes-Benz’s Canadian sales figures combine the E-Class with the CLS-Class.
^ Audi Canada’s A4 sales figures include sales of the Allroad
^ Total Infiniti G/Q50/Q60 sales: down 5.6% to 2589 YTD, up 27% to 292 in October. Total G sedan and Q50 sales: up 1.1% to 2128 YTD, up 46.7% to 267 in October.