Amidst the embarrassment of not being able to deliver cars to dealers, Ford did sell more Lincoln MKZs in Canada in February 2013 than Mercedes-Benz sold R-Class wagons. Consolation prizes are awesome.

The first one-sixth of 2013 hasn’t just been kind to the 3-Series. BMW’s clear-out of now fairly ancient 1-Series coupes and convertibles resulted in a 124% year-over-year increase in January and a 363% improvement in February. The 1-Series is not a high-volume car, or at least it wasn’t. But it did outsell the Cadillac ATS/CTS duo in February, the Infiniti G (with ease), and the majority of other premium brand passenger cars.

Put it down to weather, a lack of consumer confidence, or just a levelling off of what has been an extraordinarily strong Canadian automotive market in preceding year, but the industry is down 2.8% this year. You then won’t be surprised to see plenty of red font in this luxury car sales post. 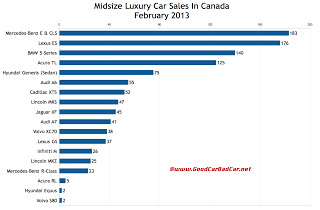 The worst declines were recorded by three cars that are undergoing replacement or will be be replaced soon, the CTS and Infiniti G and Lincoln’s MKZ, as well as Acura’s TL, the Hyundai Equus, and pricey cars from brands that maybe have no business competing at this price point. You can buy a Nissan Maxima that costs $43,180, but you won’t, because you can buy an all-wheel-drive Mercedes-Benz C300 for less than $40K. Give me a break.

Be ye reminded that historic monthly and yearly sales figures for all these vehicles can be found by clicking the model name in the tables below or by selecting a make and model at GCBC’s Sales Stats page. The accompanying charts can be clicked for a larger view. And don’t forget, the four tables you see here are sortable, so you can rank vehicles any which way you like: by volume, year-to-date volume, or by year-over-year change. Feel free to offer suggestions on how you’d like to see GoodCarBadCar break down luxury car segments in the future.

Source: Automakers & ANDC
* Indicates a model which is also shown in another GCBC segment breakdown
^ sedan only