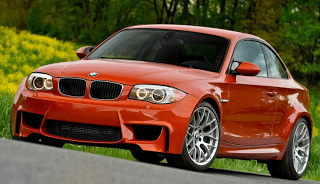 Compare that figure with the BMW division’s overall 11% year-over-year increase and you, as a BMW fan, will be particularly disappointed. But even BMW Canada’s improved sales figure could be challenged. Without the all-new X1 SAV, BMW Canada sales would only be up 2.2% this year.

Because of a new 3-Series that we’ll be able to buy next year, decreasing sales of the current E90 3-Series are ancitipated. Indeed, they’re decreasing, down 30% in August; down 9% year-to-date. The BMW 3-Series remains Canada’s most popular premium brand vehicle.

As for other smaller or less expensive luxury cars, Mercedes-Benz C-Class sales shot up 27% in August. B-Class sales plunged 41%. A new B-Class isn’t far off. Cadillac CTS sales shot up 35%. Even with those gains, the CTS wasn’t as frequently acquired as the Audi A4 (down 2%) Infiniti G (down 9%). Other Japanese automakers saw sales of Acura’s CSX sales rise 38% and TSX sales slide 38%. Sales of the Lexus CT200h jumped 73% from the month prior. Year-over-year, the Lexus HS250h was thankfully down 61%; the Lexus IS was up 46%.

Speaking of struggling Japanese luxury cars, sales of the painfully boring Acura RL were up 200%. All the way from one unit in August 2010 to three units in August 2011. Why do they bother. The TL was down 37%. Acura as a whole was down just two units, however, as MDX sales shot up from 567 to 705.
The third-generation Infiniti M appeared to be a car that could potentially battle for customers against the Mercedes-Benz E-Class, BMW 5-Series, and Lexus ES, just as the Infiniti G stands up to the C-Class, 3-Series, and IS. Although it’s been a tough year for Japanese manufacturers, it still seems odd to see M sales down 37% from what were already distinctly low totals. Year-to-date the M family is off by 29%. Mercedes-Benz sold 133 more E-Class and CLS-Class sedans in August alone than Infiniti’s sold Ms all year.
Lexus was down just 4% in August, a figure which is surprisingly decent for a firm that’s struggled mightily since Japan’s disastrous March. Without the CT200h from the chart above, however, Lexus car sales would’ve been down 4% instead of up 30%. Overall, the brand would’ve been down 18%. GS sales fell 35%. The ES350 was down 16%. Sales of Lexus’ hybrid passenger cars formed 18.6% of all Lexus Canada sales in August. Three of those hybrid sales came from the GS450h. 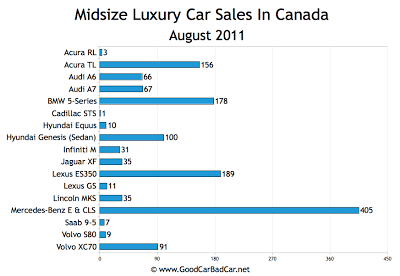