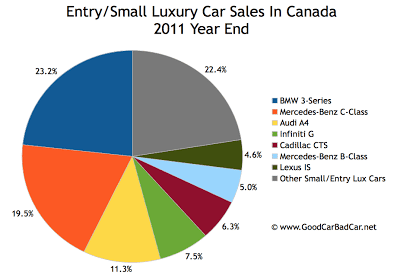 Cadillac sold 227 DTS sedans in 2011. Lincoln did better with the Town Car, selling 310 of the big boats. These were not the two best-selling luxury cars in Canada.

Further down the pack, another German, Audi’s A4, was third in class. Infiniti’s G20/G37 sedans and coupes reported an 18% decrease but still finished 555 sales ahead of the Cadillac CTS.

Mixed in with these cars are some midsize and/or more expensive luxury cars which you’ll find in the table after the jump. Monthly and yearly sales figures for any of these cars, for any current model on sale in North America, can be found by accessing the dropdown menu at the top right of this page.

Acura’s RL is unbelievably unpopular. By that we mean, it’s hard to believe that a luxury car with that much power and that much all-wheel drive technology can be so rarely acquired. Until, that is, you remember that we’re talking about the Acura RL, one of the most boring cars in the world, a Bad 8 loser.

For every RL Acura sells in Canada, BMW sells 53 5-Series sedans or Gran Turismos. Well, probably not Gran Turismos; they don’t really sell any of them, do they?

Obviously you could easily make the case that many of these cars are nothing more than indirect competitors. The Hyundai Equus is priced like many of the cars listed below, badged like a mainstream car, and sized like a Mercedes-Benz S-Class. The Volvo XC70 is, to many eyes, an SUV or crossover like its XC60 sibling.

Regardless, sales figures don’t lie. How the cars are lined up won’t change that fact.