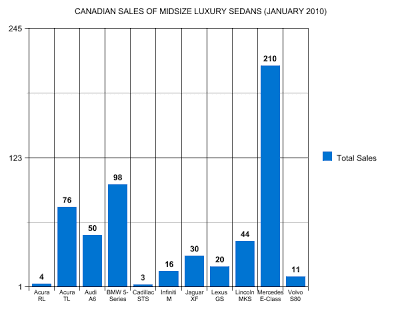 Home
All Vehicle Rankings
Passenger Car Sales
Midsize Car Sales
Midsize Luxury Car Sales
Compared with 3,824 U.S. sales of the Mercedes-Benz E-Class in January, 210 sold in Canada seems like nothing. Realizing that the Mercedes-Benz E-Class sold at a greater rate than any competitor will help you understand the largesse of these Sales Stats.
The Cadillac STS is nearly nonexistent in Canada. The Acura RL doesn’t fare much better. Just as Canadians would rather purchase a Honda Civic than a Honda Accord or a Mazda 3 instead of a Mazda 6, sales of these middle-rung luxury cars pale in comparison to that of their smaller brethren. That being said, this is still serious money-making territory for automakers. Just because these premium automobiles sell for twice as much as standard midsize fare, don’t believe they cost twice as much to build.