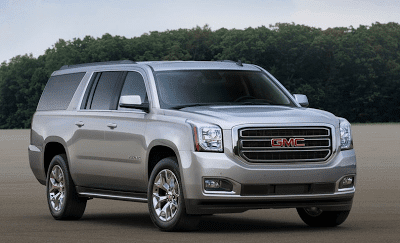 Canadian families, rental car companies, and DND fleets made the GMC Yukon XL their favourite full-size SUV in September 2013, although it ranks fifth in a class of seven through the first three quarters of 2013.

Sales of the year-to-date leading Chevrolet Tahoe rose 45% in September, but four of 2013’s slower-selling large sport-utilities posted more significant year-over-year gains. The Yukon XL more than tripled its September 2012 volume, and sales of the Chevrolet Suburban and Toyota Sequoia more than doubled.

The market for large SUVs grew 56% in September 2013 but it only accounted for 0.42% of all new vehicles sold in Canada. Through nine months, these seven SUVs are up 11% – the Canadian auto industry is up a little more than 3% – but they still make up a fraction of the industry’s output, just 0.44%.

Could this change next year when General Motors begins delivering its new generation of full-size SUVs? Perhaps. But only slightly.

You can click any model name in the table below to find historical monthly and yearly Canadian auto sales data. You can also select a make and model at GCBC’s Sales Stats page. This table is now sortable, so you can rank large SUVs any which way you like. Suggestions on how GCBC should break down segments can be passed on through the Contact page.