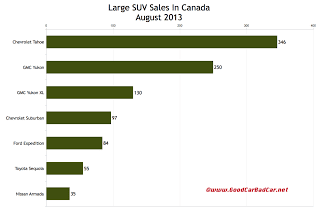 Year-to-date, all three rivals from Ford, Nissan, and Toyota have posted declining volume. (GMC’s own Yukon XL is down 7% this year.) At this time last year, Ford Canada had sold 1342 Expeditions.

The Expedition’s decline, combined with the Tahoe’s 44% year-over-year increase, has seen the Expedition fall to second place in the large SUV sales race, and it’s in danger of sliding into third. GMC’s Yukon, a Tahoe twin, is only 94 sales back.

You can click any model name in the table below to find historical monthly and yearly Canadian sales data. You can also select a make and model at GCBC’s Sales Stats page. This table is now sortable, so you can rank large SUVs any which way you like. Suggestions on how GCBC should break down segments can be passed on through the Contact page.