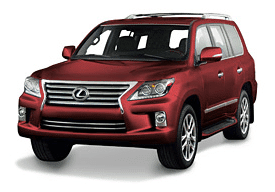 Canadian sales of the Lexus LX570 tripled in February 2013. The LX sold just as often as Lexus’s flagship sedan, the LS, sales of which jumped 500%.

While the LX and LS are on the upswing, and have been for some time, both vehicles sold much less often than their competitors in February 2013. We covered the LS’s segment earlier this morning. Here, the LX570 is shown to have been sold only once for every five Range Rovers. The Avalanche-based Cadillac Escalade EXT sold 25 times, more than twice as often as the Lexus. For the record, Cadillac also sold eleven long-wheelbase Escalade ESVs and 22 regular-wheelbase Escalades.

Between the extraordinarily popular GL-Class and the ultra-niche Geländewagen, Mercedes-Benz sold 192 top-end sport-utility vehicles in Canada in February 2013. That equals an astonishing 45% of the 423 sales represented by these seven nameplates last month. The Benz duo found 62 more buyers in February of this year than in February of last year. The combined unit increases for the Infiniti QX56, Range Rover, LX570, and Lincoln Navigator totalled 62 units.

You can always find historical monthly and yearly sales figures for all these big utilities by selecting a make and model at GCBC’s Sales Stats page – you can also click a model name in the sortable tables below. Feel absolutely free to make suggestions on the way GCBC breaks down the large luxury SUV category. And don’t forget that you can rearrange the order of utility vehicles below, ranking them by February or year-to-date totals.