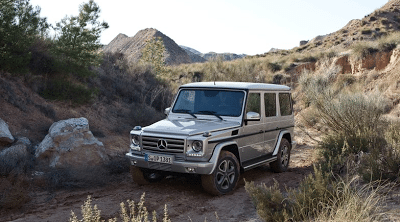 Mercedes-Benz’s supposedly ultra-niche G-Class SUV ($120,900-$149,900) actually outsold the Range Rover, Lexus LX570, and Lincoln Navigator last month. All three of those SUVs have sold more often than the G-Class through the first two-thirds of 2013, but sales of the Navigator have been cut in half this year, and Lexus LX volume is shrinking, as well.

Most of these SUVs compete in slightly different sections of the high-end luxury market alongside many smaller SUVs and crossovers which are available with big engines and premium trims which drive up their prices. In other words, it’s hard to define what makes a direct competitor when prices rise this high, when equipment levels vary to this extent, and when originality becomes so vital to a nameplate’s success.

The Porsche Cayenne, for example, which has a base price below $60,000, tops out at $166,600 before options. Porsche Canada sold 199 Cayennes in August 2013. GCBC charts the Cayenne with midsize luxury SUVs.

You can click any model name in the table below to find historical monthly and yearly Canadian auto sales data. You can also select a make and model at GCBC’s Sales Stats page. This table is now sortable, so you can rank large luxury SUVs any which way you like. Suggestions on how GCBC should break down segments can be passed on through the Contact page.

Source: Manufacturers & ANDC
GCBC isn’t here to break down segments, an impossible task for any group, but to display sales data for the sake of comparison. The more ways sales data can be displayed, the better, right? You can always find the sales results for EVERY vehicle and form your own competitive sets by using the All Vehicle Rankings posts.