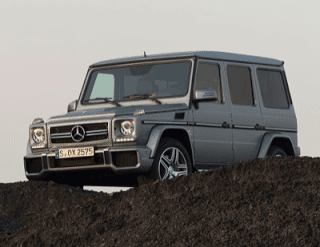 That’s right: GoodCarBadCar has Mercedes-Benz G-Wagen sales figures for the first period since 2006.

Normally what you saw in this space were combined figures for the G-Class and the newer, fresher, not as alluring Mercedes-Benz GL-Class. That total was 273 units in April 2013. Fortunately, we now know that Mercedes-Benz sold 257 GL-Class SUVs in Canada last month plus 16 G-Class behemoths.

Keep in mind, these seven upper-echelon SUVs don’t necessarily compete with one another. Top-tier BMW X5s and Porsche Cayennes and AMG Benz MLs play a role here, too. (The same could be said in every vehicle class, of course, with cars creeping up and down from other segments depending on trim and engine variants.)

Even among these seven, does a $81K Avalanche-based Cadillac Escalade EXT enter into the conversation when a buyer is considering a $121K G550? Probably not. Does the fact that Infiniti’s QX56 and Lexus’s LX570 each sold the same number of times in Canada last month become less interesting when we realize that Infiniti is charging $14,300 less for their biggest SUV? Yes.

Nevertheless, the Escalade, QX, Range Rover, LX, Navigator, G-Class, and GL-Class are the biggest and baddest and priciest SUVs that luxury automakers bring to the table. And though rare by F-Series/Elantra/Grand Caravan standards, they’re surprisingly popular. They combined to find 498 buyers in April, 52% of whom came to the category through the Benz GL. Seven full-size mainstream brand SUVs only attracted 602 buyers last month.

You can click any model name in the tables below to find historical monthly and yearly Canadian sales data. You can also select a make and model at GCBC’s Sales Stats page. This table is now sortable, so you can rank Canadian large luxury SUVs any which way you like. Suggestions on how GCBC should break down segments can be passed on through the Contact page.