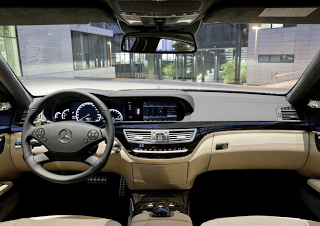 Of the 181 large luxury cars sold in Canada in August 2011, 83% wore German badges. 67% of the offerings are German, so it’s not hard to come to the conclusion that the Germans carry more than their fair share of the large luxury car market.

As for the Germans, Audi A8 sales fell 15%, BMW 7-Series sales rose 22%, the Porsche Panamera improved by two units (or 6%) to 33, and sales of the Mercedes-Benz S-Class and its coupe counterpart were level at 50. Despite its much, much lower price, you can consider the Hyundai Equus a rival for these cars if you like. Hyundai sold ten copies of their big sedan. You can see how it compares to similarly-priced models here.

American brands do attempt to sell jumbo luxury limos, too, but those attempts won’t be made much longer. Cadillac sold only a single DTS in August; Lincoln sold just two Town Cars. Cadillac and Lincoln do know how to sell jumbo luxury SUVs, however.
Navigator sales jumped 45% at Lincoln as the company’s large Ford Expedition-based SUV out-sold the Ford Flex-based MKT and Ford Taurus-based MKS. Sales of regular-wheelbase Escalades improved by 33%. The long-wheelbase Escalade ESV was up 58%. Escalade EXT sales jumped 64%. Together, these significant year-over-year percentage improvements amount to 27 extra Cadillac Escalades sold in August 2011, over and above what Cadillac accomplished in Canadian showrooms in August 2010.
Not for the first time Toyota’s Land Cruiser out-sold the Lexus LX570. Check out Toyota Canada’s website: you won’t find the Land Cruiser for sale. The Lexus LX570’s Canadian base price is $89,950. In the States, the Land Cruiser is 13.3% less than its more upscale Lexus brother. Theoretically, this makes the Land Cruiser a $77,987 proposition in Canada, not that pricing schemes are that straightforward. 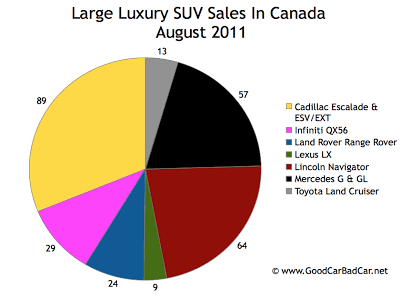