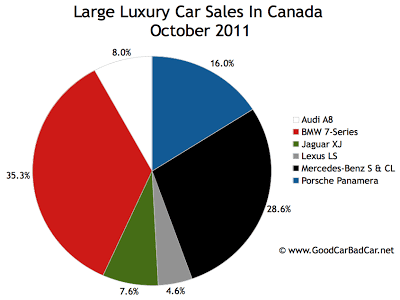 Canadian BMW 7-Series sales slid 13% in October, yet the biggest BMW was still the best-selling large luxury car in Canada, 24% more successful than the Mercedes-Benz S-Class, sales figures for which take the CL-Class coupe into account.

Despite its freshness the Audi A8 didn’t fare as well this October as it did in October 2010. Sales fell 30%, the worst drop in the segment. Conversely, the A8’s year-to-date improvement, 84%, is markedly better than the improvement posted by either the Jaguar XJ or Mercedes-Benz S-Class. The 7-Series is down through ten months, as are the Lexus LS and Porsche Panamera. Lexus sold one hybrid LS in October 2011. It costs $121,750.

Check out the sales figures of jumbo luxury sport-utility vehicles after the jump. Infiniti QX56 sales jumped 128% in October. Even after doubling QX56 sales, Infiniti trails the three-pronged Cadillac Escalade lineup by 508 units through ten months. The class-leading Mercedes-Benz GL-Class, along with the tremendously wicked G-Class, is a significantly more likely purchase than the Escalade in Canada, regardless.

All these sales figures can be seen in GoodCarBadCar’s new searchable sales database in which monthly (back to January 2010) and yearly results (back as far as 2002) for specific models can be easily found. Just check out the dropdown menu at the top right of the page.