BMW 7-Series sales fell off a cliff in Canada in June 2011 with a 47% plunge that, admittedly, had looked entirely plausible after May’s abysmal 38% decline to 40 units. With just 37 sales in June the 7-Series was way, way back of the S-Class Mercedes and behind the Porsche Panamera, as well. It seems likely that with this kind of performance verging on routine, the Jaguar XJ could surpass the 7-Series Bimmer in monthly volume by autumn.

Oh, the Jag XJ, such an odd duck in photos. In the flesh it has the sort of presence normally reserved for the class above; Rolls-Royce and Bentleys and the like. Only, the Jaguar XJ looks entirely modern, not just sophisticated and expensive. Sales of the biggest Jag fell 38% in June but remained level with May’s results. Audi A8 sales rose 700%. Yes, that’s a lot, but they only sold 2 in June 2010, so any improvement will generate gigantic year-over-year gains.

All the large luxury limos available are charted below. You’ll find large luxury sport-utilities by simple scrolling a bit. 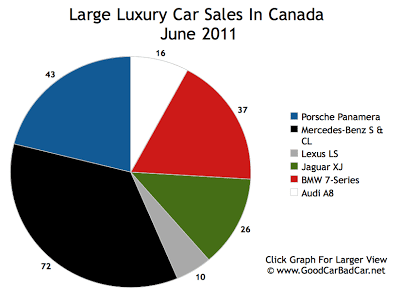 Lexus LS sales may’ve been level at 10, but the company’s big SUV didn’t fare even that well. The LX570 slid 45% to just 6 units. What hurts even more than the drop-off is the fact that many other luxury automakers can still sell jumbo luxo utes without much difficulty. Lexus has only sold 67 LX570s all year. Mercedes-Benz sells that many G-Wagens and GL-Class SUVs every couple weeks.
Set aside the ESV and the EXT and you’ll still find that Cadillac sold nearly as many Escalades in June as Lexus sold LX570s in the first six months of the year. 61 out of the 97 Escalades sold were regular-wheelbase ‘Slades. 17 were extended versions, 19 were Avalanche-based EXTs.
The Infiniti QX56 might be hard to look at from some angles, but customers seem to prefer it over the old one. Sales rose from 6 in June 2010 to 29 in June 2011, a 383% jump. Range Rover sales were up 52%. Even Lincoln Navigator sales improved, from 58 to 66, in fact. Lincoln as a whole was down 23% but the Navigator isn’t to blame.
As for the class-leading Benz pair – very few of which sold could actually have been G-Wagens – sales last month were up 27%. This while GLK sales fell 16% and the M-Class was off 5%.