Their volumes are tiny but the impressions they leave behind are huge. The sight of one $236,000 Mercedes-Benz S65 AMG will leave you feeling…. poor. Feast your eyes on a $198,100 Porsche Panamera Turbo S and you’ll envy the performance that’s at its drivers bestowal. You’ll also pity the fella’ for driving such an ugly beast.

Large luxury limos are about as prone to being disliked for nitpicky reasons as sports cars. Hey, if you’re going to spend $186,000 on a BMW 760Li you expect perfection, right? Whether the 164 Canadian car buyers who acquired one of the six mind-blowingly luxurious cars in the chart below received perfection in exchange for tens or hundreds of thousands of dollars; that’s up to the new owners to decide.

By the way, both the Lexus LS and Jaguar XJ made appearances on GoodCarBadCar.net’s three-part Worst-Selling Vehicles post from earlier this week.

Fuel efficiency perfection has not yet been attained by any of the seven large luxury sport-utility vehicles in the next chart. While eating some of Ristorante a Mano’s excellent pollo pizza on Saturday, a black Cadillac Escalade Hybrid pulled up beside our table. Had the sun not been directly above our table the Escalade’s shadow would’ve cooled things off substantially. But that’s beside the point.
The 21-mpg Escalade Hybrid costs $95,080 in Canada. It’ll help you travel an extra 2.6 kilometres on every litre of gasoline compared with the $84,935 “regular” Escalade. That’s an extra $10,145 for six extra miles per gallon. Oooh, but it says HYBRID in really big letters all over the side of the vehicle. And that’s gotta be worth at least nine grand.
For the record, GM Canada is currently advertising the Escalade with $11,342 in discounts and the Escalade Hybrid with $1116 beyond that.
The $89,950 Lexus LX570 is rated at 14 miles per gallon by the EPA. Lexus only sold five of them in July 2011. It’s lack of popularity can surely be traced back to the single mpg difference with which Cadillac finds so many Escalade buyers and Lincoln – whoa, Lincoln is on top – locates potential Navigator clients. The Lincoln Navigator possesses the bargain basement pricetag of $73,100, a price which doesn’t take into account current incentives of $7128. 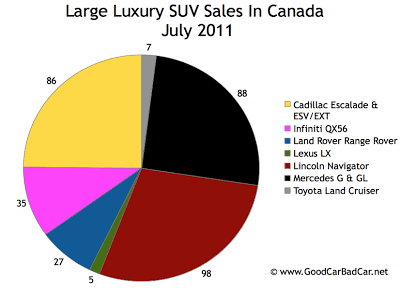