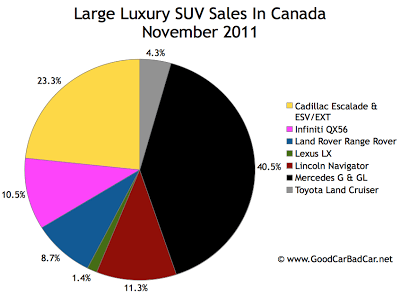 A Canadian Lexus LX570 acquisition was as rare an event as the acquisition of a Nissan GT-R in November 2011. The main difference resides in the trending direction: GT-R sales jumped from two in November 2010; Lexus LX sales fell from 15.

The LX doesn’t appear to even enter the equation for most buyers of large luxury sport-utility vehicles. Total Cadillac Escalade sales were up 4% to 118 in November, making the ‘Slade nearly 17 times more popular than the Lexus. Even Toyota’s Land Cruiser, a Lexus LX relative which isn’t officially marketed in Canada, was three times as likely to be acquired in November than the LX570.

At the top of the heap is Mercedes-Benz’s GL-Class – along with the ultra-rare G-Wagen – which together reported a 26% year-over-year jump. G/GL-Class sales are up 24% through the first eleven months of 2011. This means that for every buyer who walks into a Canadian Mercedes-Benz dealer to buy an S-Class or S-Class Coupe CL-Class, Mercedes-Benz’s flagship SUV pair finds 2.3 buyers.

Check out last month’s version of this post here; the U.S. edition here; or find monthly and yearly sales figures for all these vehicles and every other model currently on sale by accessing the dropdown at the top right of this page.

Although distinctly less popular than its two more famous rivals, the Lexus LS was a rare breed in Canada’s luxury limo sector last month. The LS was up 12% last month; every one of its rivals didn’t fare as well in November 2011 as they did in November 2010. Nevertheless, BMW sold more than twice as many 7-Series sedans as Lexus did LS sedans, and the combined efforts of the Mercedes-Benz S-Class and its coupe brother, the CL-Class, was even more popular.

Of course, popular is a difficult word to use when you’re talking about cars which, collectively, amounted to 0.014% of Canada’s new vehicle market in November. South of the border, the very same six cars accounted for 0.05% of all new vehicle sales last month.