The Porsche Panamera ran away with nearly 30% of Canada’s large luxury car market in January 2012. Sales of Porsche’s big S-Class-fighting hatchback jumped 124% to 38, more than the Panamera managed in the two preceding months combined. 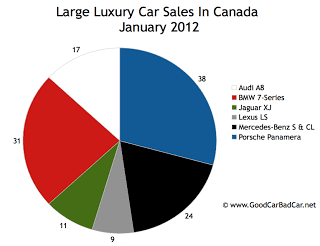 Becoming Canada’s best-selling large luxury car required sales of the Mercedes-Benz S-Class (and its CL coupe brother) to slide from the 39 units Mercedes sold in January 2011. Indeed, S-Class sales plunged 39% all the way to 24, third in class. Sales of the BMW 7-Series and Jaguar XJ were on the rise, but not to the extent that beating the Panamera was a possibility, certainly not for the Jaguar.

Sales details for large luxury cars and large luxury SUVs are posted after the jump. You can find monthly and yearly data, both Canadian and American, for all these models and every other nameplate currently on sale by accessing the dropdown menu at the top right of this page or by heading over to GoodCarBadCar’s Sales Stats home. 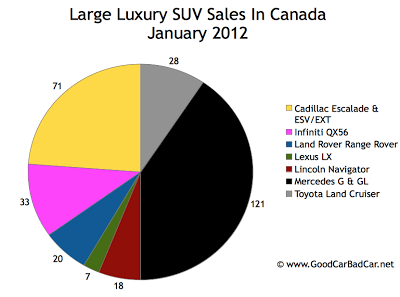