February 2012 was a month Lexus would choose to forget if it weren’t for the new buyers coming into the fold via the entry-level $30,950-$39,350 CT200h. Excluding the CT from the equation, as it wasn’t on sale at this time last year, Lexus Canada sales fell 8.8% in an overall market which grew 11.2%. While Lexus made small gains with the HS250h and new GS, every other model line in the family reported declines, even the brand’s constant leader, the RX. (RX hybrid sales were up 12.2%, or five units.)

It was at the top end, however, where Lexus’s declines were harshest. Sales of the LS, the company’s biggest sedan, plunged 80%, or eight units from an already low ten in February of last year. This means Lexus sold one LS600hL hybrid, same as in February 2011, and one LS460, down from nine in February 2011. The LX570 also had a bad month as sales slid from 14 at this time last year to just four. Together, Lexus’s two flagship models accounted for just 0.7% of the brand’s Canadian sales in February. Compare that with BMW where the 7-Series sedan alone was responsible for 2.4% of the brand’s total Canadian volume, volume which was more than double Lexus’s February output.

Now Lexus has had Canadian sales issues off and on (mostly on) for months now, even before last March’s major Japan quake and tsunami. But this edition’s numbers are particularly embarrassing. The U.S. market, which was 10.8 times stronger than the Canadian market in February 2012, gobbled up 258 times more LS sedans than the Canadian market. Admittedly, Americans have a larger appetite for expensive luxury sedans – 7-Series sales were 25.5 times stronger in America in February, for example – but Lexus Canada has lost its grip on the high-end market. No wonder they’re advertising the CT200h like it’s the only model in their portfolio.

As for the Toyota Land Cruiser, inquiries were made and reasons were found out. For quite some time it has seemed strange that Toyota Canada would be selling Land Cruisers in greater numbers than the Lexus LX570, especially when one considers the fact that Toyota.ca doesn’t even feature the Land Cruiser. In fact, the real Land Cruiser wasn’t finding buyers willing to specially import the Land Cruiser – the vehicles sold were, according to Jeff Porter at O’Regan’s Toyota in Halifax, “Just cab and chassis that are for off road use only, mostly in mines. They are never registered for on road passenger use.”

The Land Cruiser has thus been scratched off GoodCarBadCar’s Canadian Large Luxury SUV table, which you’ll see after the jump.

Monthly and yearly sales figures for these hugely expensive cars and sport-utility vehicles, as every other automobile on sale in North America, can be accessed through the dropdown menu at the top right of this page or at GoodCarBadCar’s Sales Stats home. 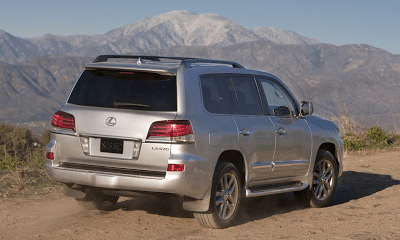