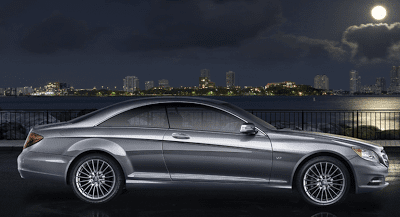 With 2229 sales between the six cars, Canada’s large luxury segment vacuumed up just 0.14% of the new vehicle market in 2011. That’s down from the 0.16% owned by the category just a year ago. The declines reported by 67% of the cars in the segment were too much for the Audi A8 and Jaguar XJ to overcome.

If you choose to consider the Hyundai Equus a member of the large luxury segment, then some numbers must change. As the seventh-ranked car, the Equus’s market share would be 4.9%, enough to pull the S-Class’s market share down from 33.4% to 31.7%, enough to pull the sixth-ranked Lexus LS down to 6.7% from 7%. Moreover, the segment’s share of the overall market climbs to 0.15%, still down from last year, and that’s with an extra car in the mix.

As for the S-Class/CL-Class issue we’re faced with in the Canadian results, we know that 7.1% of the S and CL-Class Benzes sold in America are CL coupes. With that number in mind, we can assume – and that’s all it is, an assumption – that Mercedes-Benz Canada sold 53 CL-Class coupes in 2011, dragging the S-Class sedan’s total down to 691. If that’s the case, the S-Class’s victory remains, at the very least, secure.

After the jump you’ll find numbers for the distinctly more popular large luxury SUV category. Monthly and yearly sales figures for those vehicles, for these large luxury cars, and for every other model currently on sale in North America can be found by accessing the dropdown menu at the top right of this page. 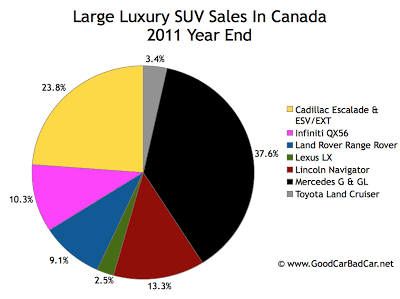 26,630 Mercedes-Benz G-Wagens and GL-Class SUVs were sold in America in 2011. Shockingly, though America’s market was only eight times the size of Canada’s, those Benz SUV sales totals are 15.5 times better. Ignore the digression, as you’ll often find that U.S. luxury sales figures vary more wildly than the overall market’s tendencies. That’s all the more reason to suspect inaccuracies in any assumption regarding how many G-Wagen Benzes were sold in Canada in 2011, but we’ll make an effort anyhow.

4.5% of the U.S. G/GL total was G-Wagen-derived. If that figure holds, we would conclude that around 77 G-Class SUVs were sold in Canada in 2011 along with 1645 copies of the conventional GL-Class utility.

We also know that 652 regular-wheelbase Escalades were acquired. That left 223 Escalade ESVs and 217 Escalade EXTs. Measuring by year-over-year percentage increase, the Infiniti QX56 was one of the fastest-growing nameplates in Canada. 205 more were sold this year than there were last. An extra 65 Land Cruisers were sold this year, too.