This post’s accompanying chart is clickable for a larger view. The list below ranks all 30 of Canada’s top-selling vehicles, including a handful of cars which weren’t present in this group a month ago. The Nissan Versa climbed to the 30th spot while also landing a spot on Canada’s worst-selling vehicles list (when ranked by year-over-year decline.) The Nissan Rogue and Hyundai Tucson also cracked the top 30 after narrowly missing out in June. Meanwhile, the Kia Optima, Kia Rio, and Chrysler 200 were dismissed. 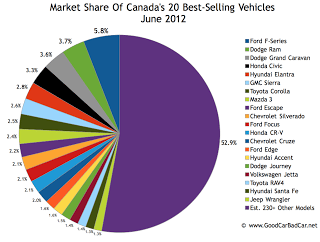 U.S. brands landed 14 different vehicles on this June 2012 list. Four of those 14 automobiles are passenger cars. There’s one Volkswagen, five Korean vehicles, and ten Japanese-branded machines. Historical monthly and yearly sales figures for all these vehicles can be accessed free of charge through the dropdown menu near the top right of this page or at GCBC’s Sales Stats home.

GoodCarBadCar published a few other Canadian best seller lists on Friday. Links to those posts are posted at the bottom of this article. You can examine detailed June and year-to-date sales figures for Canada’s 30 best-selling vehicles below.