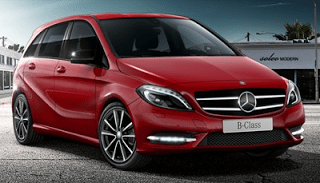 Of the 95,000 vehicles Canadians registered in January 2013, 7.6% were Ford F-Series pickups. Chryler Canada’s Ram truck accounted for another 5.8% of the overall market, more than Canada’s two best-selling cars combined.

In a market which slid 2.2%, approximately 39% of nameplates reported year-over-year increases, none better than the Mercedes-Benz B-Class’s 20,000% jump. (Mercedes-Benz Canada only sold one B-Class in January 2012.)

On the flip side, sales of 24 cars, from the Honda CR-Z to the Audi R8, were cut in half, at the very least.

This All Vehicle Rankings table is now sortable. That means, for example, that you can see automobiles listed by their year-over-year change in ascending or descending fashion. Or you can click the Vehicle column header to sort vehicles alphabetically.

Keep in mind, italicized unranked lines are nothing more than available breakdowns, already included in the model’s total, not in addition to the model’s total. These lines will often be separated from their overarching vehicle line (the ISF and ISC from the overall Lexus IS, for instance) when you sort certain columns.

Refresh the page in order to return to the original order or sort the Rank column at the far left. As always, you can find historical monthly and yearly sales figures for any automobile by selecting a make and model at GCBC’s Sales Stats page.

Compared with last January, the order of the top level vehicles in January 2013 was significantly altered by the Honda Civic’s anticipated decline. The Civic fell from 2nd at this time last year to seventh last month. The F-Series, Dodge Grand Caravan, GMC Sierra, Chevrolet Silverado, Ford Focus, and Chevrolet Equinox all held their positions in the top 20.

The Hyundai Elantra, Ford Escape, Chevrolet Cruze, Mazda 3, Volkswagen Jetta, Hyundai Santa Fe, Ford Fusion, Jeep Wrangler, and Honda Accord either improved on their top 20 position or climbed in to the leading 8%. Eight of the vehicles in the bottom 20 are either on hiatus or have been cancelled.

This exhaustive list includes sales figures for all 240 nameplates sold in Canada in January 2013. Do yourself a favour by giving your eyes a break after every thirty or forty lines and  return with a cup of coffee to finish later on.

Source: Manufacturers & ANDC
Red font indicates year-over-year declining sales
* Total Prius Sales equal 429, good enough for 62nd
^ Total Genesis sales equal 111, good enough for 127th
^^ Not sold to retail customers
Italicized unranked lines are nothing more than available breakdowns, already included in the model’s total, not in addition to the model’s total. Sales data for brands such as Aston Martin, Ferrari, Lamborghini, Lotus, Maybach, Rolls-Royce etc. are unfortunately not broken down by model. estimates say sales for Ferrari and Lamborghini in January 2013 were 20 and 11. Total Maserati and Bentley volume is reported, but not by specific models.