In case you hadn’t noticed, the Pontiac sign at your local General Motors dealership is no longer hanging.

Based on the vehicles Pontiac was producing over the last couple of decades, this isn’t a sad fact. But based on the reputation held when our fathers first started buying cars, and on the cars Pontiac was just starting to actively market before its untimely death, it’s something of a travesty.

Cheer up, then. GM Canada has provided the opportunity for the faithful to collect leftover Pontiacs in 2011, along with a couple Hummers and a Chevrolet minivan which must have been manufactured before Obama became president. In the chart below you’ll see the Chevrolet Cobalt included for a bit of context. The Cobalt-replacing Cruze first started appearing in stores last fall but there’ve been some of the antiquated Chevy compacts left to languish anyhow. The volume put up by these Cobalts in the first half of 2011 (one of them in June) will help you understand the volume put up by truly defunct GM products.

And don’t go thinking that all of this action came in January 2011. Pontiac sold 27 cars in June. That ties Pontiac with Saab and has it ahead of Maserati and Bentley. And The Good Car Guy didn’t include Pontiac in June’s monthly by-the-brand recap. Gasp. 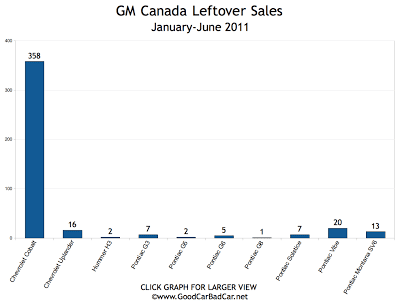